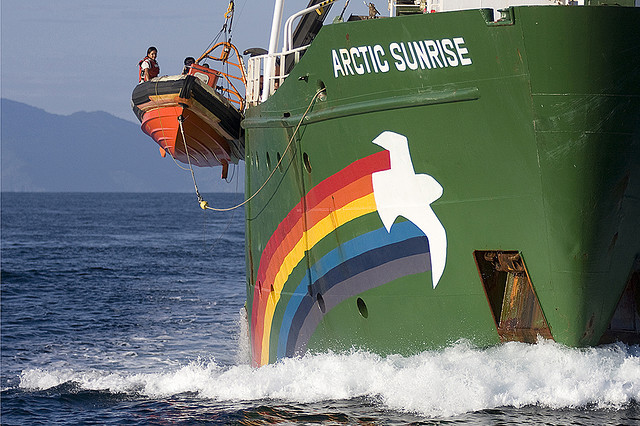 Environment campaigners in Bournemouth have welcomed European Parliament calls for the release of 30 activists arrested after they attempted to board a Russian oil rig.

The “Arctic 30” – 28 international Greenpeace activists and two freelance journalists – were arrested by armed Russian coastguards on 19 September, a day after the group’s attempt to board the Prirazlomnaya oil rig in the Pechora Sea.

Greenpeace Bournemouth and Poole Network co-ordinator Alasdair Keddie, speaking in a personal capacity, said, “It’s excellent news. Up to that point the Netherlands was the first government to make a direct plea to Vladimir Putin to release them.

“Now it’s gone to EU level that’s fantastic – 28 members states in coalition are leading the call to release these people.”

Russia has recently downgraded the charges made against the arrested anti-arctic drilling activists from piracy, which could carry a 15 year prison sentence, to hooliganism, which carries a maximum of seven years.

“Peaceful activists unfurled a banner – the response is disproportionate,” he said.

Keddie added that he had written to Bournemouth East’s Conservative MP Tobias Ellwood, calling for him to raise the issue of the Arctic 30 in parliament and with foreign secretary William Hague.

“He assured me that he would do so,” said Keddie, but added, “I’m still waiting to hear from that side of things.”

The Greenpeace Bournemouth and Poole group has reported a growth in support during its campaign against arctic drilling.

A recent fundraiser featured Doug Allen, a filmmaker best known for his work with David Attenborough.

The local Greenpeace group sold 300 tickets for the fundraiser, taking in around £2,400.

Picket lines at Bournemouth University as staff strike
Next Post: Celebrity Tweets of the Week