Juliana Nicolini
1
0
0
Maringá’s mayor Ulisses Maia has decided that some businesses can go back to their normal activities as long as they take the safety procedures established.
Total
1
Shares
1
0
0

According to the protocol, stores must open from 10 AM to 4 PM and are responsible for providing customers hand sanitizers and controlling that they wear masks while shopping.  They must also limit the number of customers inside with just one customer every 12,5 square meters.

These are other measures that shops and consumers need to take:

What do costumers think about this decision?

100 local residents shared their opinions on the changes in an Instagram Survey. Journalist Adelson Jaques (24) said: “Business should remain closed until the population is aware of how serious the situation is, as we can still find overcrowded places and people not taking the right measures to be safe”. Salesman Gian Ribeiro (30) disagrees: “ The local economy has a huge impact on daily-basis and takes longer to recover from the financial damage this pandemic brought. It has to go back to normal bearing in mind the safety protocols”.

Over 3/4 was unsatisfied with the decision: 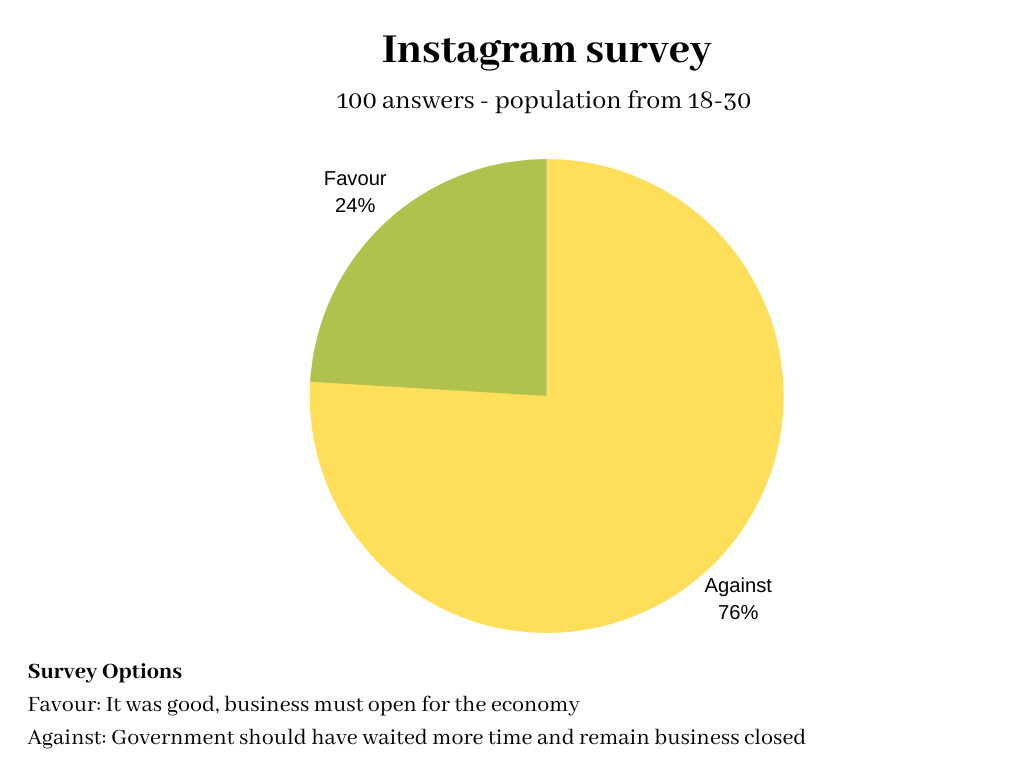 Decision and its consequences

A week after restrictions started to go back to normal, the city’s Health Department announced that there has been a 31,4% growth in cases; on April 20th there were only 54 confirmed cases and by April 26th,  71 confirmed cases. The regional newspaper Maringá Post asked the Mayor about this figure and he assured that the evolution of the virus is being monitored by specialists and that he will insist on the basic principles of prevention as a fundamental resource for the prevention of the pandemic. 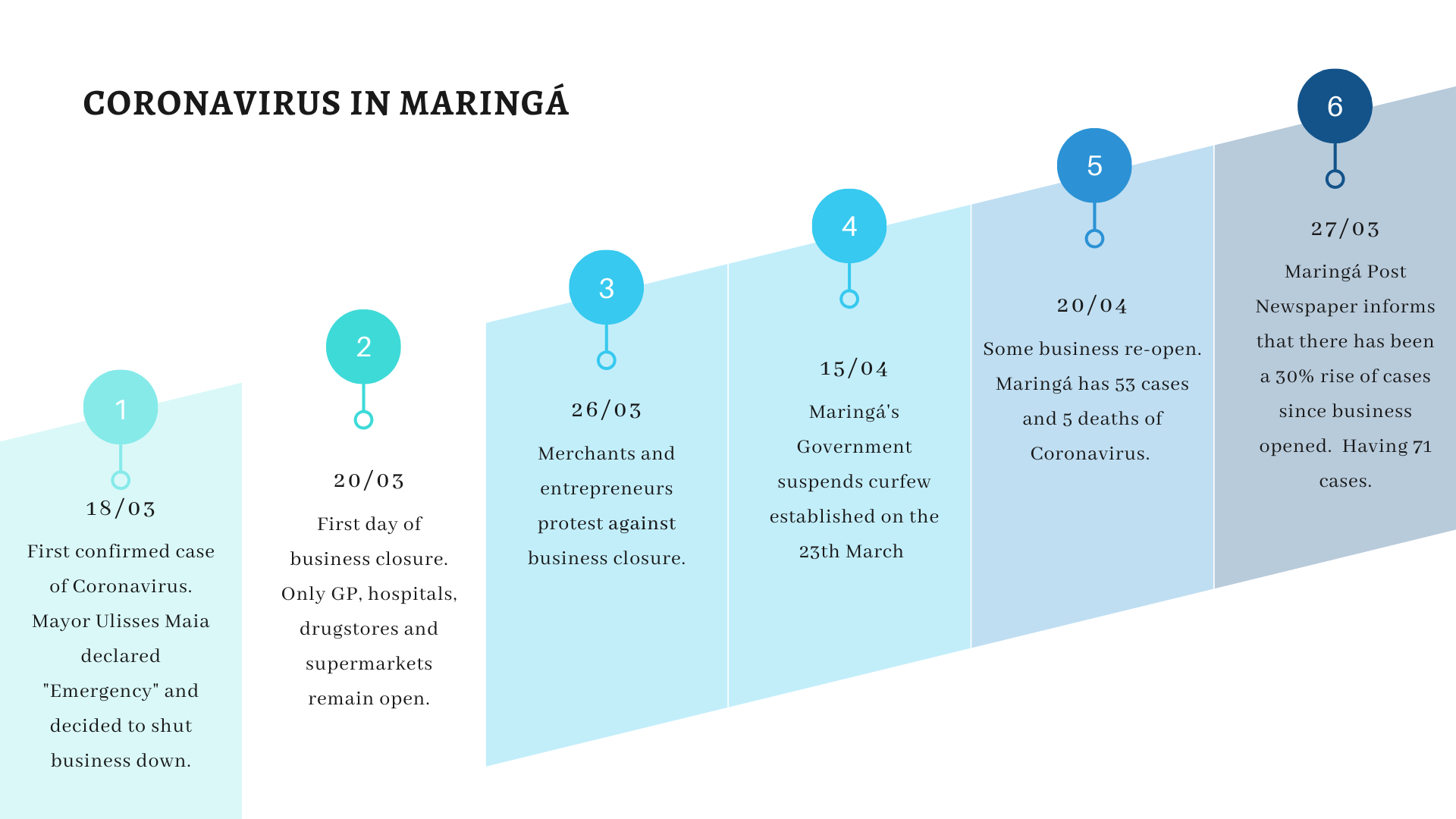 According to Ulisses Maia, the decision of re-opening some of the business was taken considering that the number of confirmed cases was relatively low compared to the city’s population as a whole, having 0,012% of the population infected. He guaranteed that if the number of cases increased significantly, everything would have to be closed again.

On March 26th, business owners and entrepreneurs pressured the government and arranged a protest asking businesses to return to their normal activities. The Mayor received a signed manifesto from fifteen entities representing various brands in Maringá arguing that stores should remain open to avoid an economic and social collapse.
Brazilian President Jair Bolsonaro has also been giving speeches supporting the reintroduction of the commercial areas all around the country.
In his social media, he posted his opinion about the topic:

“38 million freelancers were negatively affected. If companies do not produce, they will not pay wages. If the economy collapses, the servers won’t get paid either. We must open commerce and do everything we can to preserve the health of the elderly and those who are in risk”. 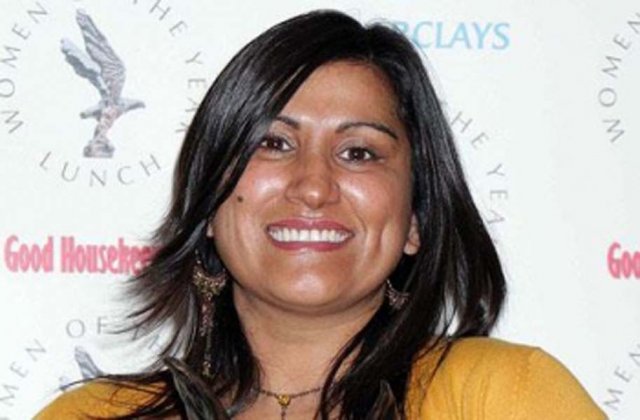 Poole is hosting a conference to help raise awareness for honour-based violence and forced marriage on 6 March. 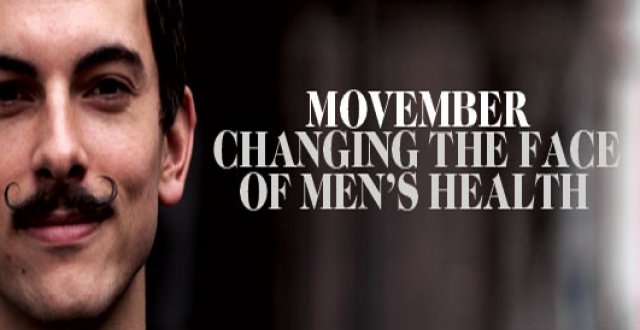 Put your razors down guys! November is all about the moustache. The male counterpart to the more established… 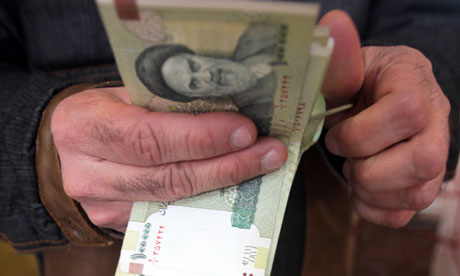