In the wake of David Petraeus’s sex scandal with his biographer Paula Broadwell, the position of Director of the Central Intelligence Agency is currently vacant. US President Barack Obama is left with a tough choice as to who could replace Petraeus as there are a number of strong candidates who could take on the role.

The most obvious choice is the acting Director of the Central Intelligence Agency, Michael Morell. In a statement regarding Petraeus’ resignation, Obama said he had the “utmost confidence” in Morell for continuing the work at the CIA. This, combined with reports from CNN’s Chief White House Correspondent, who has been told by multiple US officials that Obama has great respect towards Morell, means that he is one of the front runners for the job. Morell also has prior experience at running the CIA as he oversaw the organisation during the 2 month gap between the former CIA Director Leon Panetta and Patraeus’ time in office.

Another strong contender for the job is Obama’s top counter-terrorism adviser, John Brennan. Brennan has had a long career in the agency, leading both the Terrorist Threat Integration Center and the National Counterterrorism Center which were formed following the attack on 9/11. Obama had already considered him for the role back in 2008, but Brennan withdraw his name from consideration when he realised that the nomination hearings he would have had to attend, would have involved questioning about advanced interrogation techniques that the CIA had used on detainees in the agency’s prisons in other countries.

Obama could also consider asking Michael Vickers to take up the job. Vicker’s has also had a long career in the CIA most notably in his youth where he was the main military strategist regarding Afghanistan during the 1980’s war against the Soviets. Along with this, he also has a doctorate in military history and was a Special Forces officer in Central America. Vicker’s played a key role in the killing of Osama bin Laden and was closely involved in planning SEAL  Team 6’s raid on the compound in Pakistan. One advantage he has over the two candidate already mentioned is that unlike the others, he was not working at the CIA when waterboarding and other such advanced interrogation techniques were being used.

A final contender for the job would be former California Representative Jane Harman. Harman was a member of the House of Representatives between 1993 and 2011, during which time, she served on nearly all of the committees that focused on the military and national security. She is regarded in her party as of the top experts on national security and seen as holding a liberal stance when it comes to social issues and a more moderate one in terms of economics. Should Harman be chosen, she would become the first female Director of the Central Intelligence Agency in U.S. history.

No matter who Obama chooses, there is unlikely to be any major changes to the organisation and policies are likely to be carried out in the same manner as they were under Petraeus. 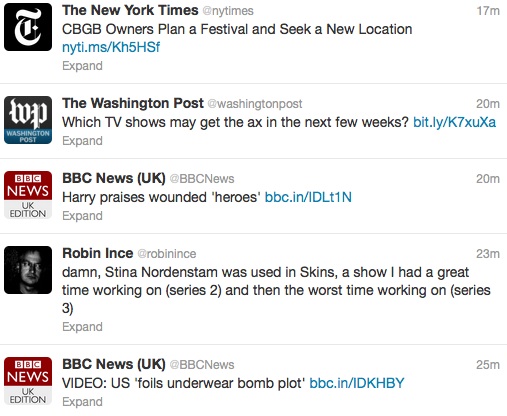 Twitter fans rate the micro-blogging service as the fastest and number one news source. Andria Archontides looks at whether Twitter is becoming the place to go for news.

The life of a Diva: Timeline

Whitney Houston has had a career filled with milestones, record breaking hits and many life achievements. Laura Curtis has composed a timeline of her life.