Karen Yun
0
0
0
Why watch the news but not sometime more casual after a heavy school day? Current research shows that youths are not so much looking for ‘news’ but a sense of belonging to their own life. News For Youth aims to bring Hong Kong teenagers back to watch news program more often with subjects that they are interested in.
Total
0
Shares
0
0
0

According to the Chinese University of Hong Kong, in the recent years there has been a significant decline in teenage newspaper readership in Hong Kong (HK).

Their research in 2009 shows youths only spend 5.8% of their time reading newspapers whereas 18.5% using social networking and 35.9% using online forums.

Living in the digital age, this problem does not just appear locally in Hong Kong but occurs around the global. This issue has become a main concern within the society since the next generation pays less attention on news consumption.

If I have to operate a news channel for youngsters, it will aim to engage news that is more relative to the teen’s life.  I name it “News For Youth”(NFY).

As some topics in the ordinary news hardly appeal to the lives of teenagers, NFY will engage more with subjects that the teens are interested in.  Starting with a short newsreel, local, national and global news will be covered daily. The duration of the program will be half of a standard news program. This allows the youths to know what’s going around the world without boring them by only watching an in-depth 15 minutes news reporting.

[wpcol_1half id=”” class=”” style=””]On the other hand, more time is spent on topics that the teens enjoy. Soft news such as current affairs, technology, fashion and sports are hot topics within HK teenagers’ societies, especially school sports championships. Looking back at Kick Up the Arts, a project I have done in my degree course as example. NFY hopes to feature individual stories that explore current teenagers’ problems and help them to resolve it through the program.[/wpcol_1half] [wpcol_1half_end id=”” class=”” style=””]
Kick Up The Arts, a student project that looks into current teens problems[/wpcol_1half_end]

I also came across a research paper that shows that youths are not so much looking for ‘news’ but a sense of belonging to their own life.

In relation to that paper, I will add interactive elements in the program such as a daily survey and ‘Your News ’.  Voting and comments on the survey will take place online but announcing the result is part of the program. Showing outstanding audience news that is submitted through online content,  ‘Your News’ emphasises on the teen’s participation on the program.

Serious reporting style and attitude is another element that put teens off the news. Why watch the news but not sometime more casual after a heavy school day? Using young reporters and presenters would be an advantage as they share similar thoughts to the audience and offer them familiarities.

[wpcol_1half id=”” class=”” style=””]Taking a popular HK informational program ‘東張西望’ as an example, NFY’s setting will be cosy and colourful. Reporters’ use of language will be casual and conversational, aiming to bring a friendly attitude towards the audience.

Apart from the dominated language, which is known as Cantonese, the English language also plays a significant part in news reporting within Hong Kong.[/wpcol_1half] [wpcol_1half_end id=”” class=”” style=””]

Both of the two main television broadcasters in HK air a Cantonese news program as their main news outlet alongside with an English sub-news program. NFY is going to follow this trend and broadcast in both languages. The 20 minutes Cantonese news program will be aired first at 5pm, a time students have already finished school.  Following up is the English version at 5:30 pm that contains same content.

Named as the leading telecommunications hub for the Asia-Pacific region, Hong Kong’s Internet penetration rate ranks first in Asia and sixth in the world (HKTDC, 2010). News channels today can’t survive without getting their contents online, channels such as TVB have their own site that contains all their news contents.

Teens today are called as the “Net generation” who are often Internet natives. It is really important to have a quality news website that is always up-to-date and tightly connected to the program.

NFY will work as a standard news site, which contains functions such as a site map, date, weather, and contact detail. As its targeting HK, multi-language is needed. Users can select between English and Cantonese at anytime on the website.

News clips will be divided into different categories, this make it easier for users to select a specific topic. Furthermore, by having a login system it allows users to save articles, rate and comment on clips, it allows users to submit to the ‘pic of the day’. It allows the staff to analyse the trends in articles being read for future improvements.

The site will contain unique materials like exclusive interviews, program making of and discussion forums that the TV channel doesn’t include.  A weekly editor’s blog and ‘who are we’ (staffs’ own introduction page and detail) will be included to emphasis the site transparency.

High level of social media engagement is needed as teens are heavily relying on them everyday. Frequent updates on Facebook, Twitter and Weibo (a popular chinese micro-blog society) can drive users back to the main site as the target users check these sites daily.

The job allocation of our website staffs will be similar to the traditional newsroom. Lead by an editor and a sub editor, two news editors that take responsibility each on one language, doing fact checking and follow up on continues stories.

Two content writers to keep the news up-to-date in both languages. They will cooperate with the two social media co-ordinators to make sure fresh news will be delivered in both the news site and social media contents.  The two social media coordinators are also responsible for publishing news discussion and audience feedback. Finally, a visual editor will in charge of the ‘pic of the day ’ content and visual materia used in the site.

Boxing, astronomy, and crosscountry skiing. Phone scam in Taiwan. Hedgehogs and climate change... A roundup of The Breaker stories, in audio. And a behind-the-scene podcast of how our edition took shape.

In an age where there are more rivals for teenagers time than ever, Dan Crossen explores how to get and keep their attention when it comes to informing them of the latest news. 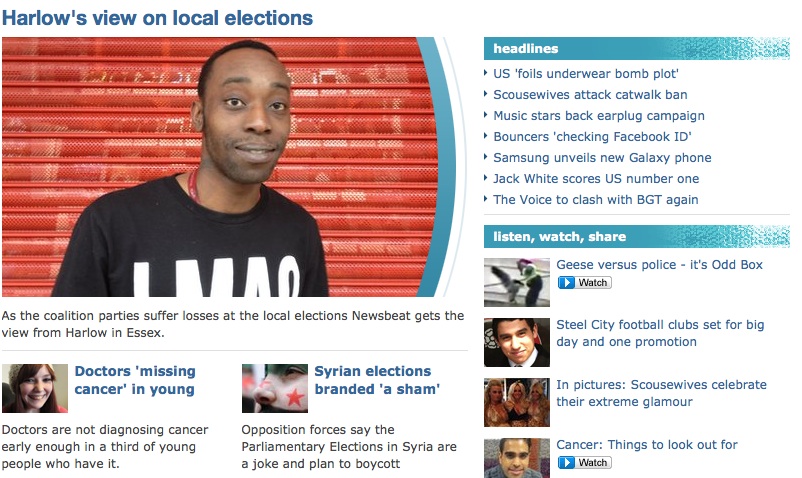 Young people are consuming less and less news. In this blog post, The Breaker writer Tim Butcher discusses why he thinks this might be - and proposes a new youth TV channel that would seek to address it.