Tim Butcher
0
0
0
Young people are consuming less and less news. In this blog post, The Breaker writer Tim Butcher discusses why he thinks this might be – and proposes a new youth TV channel that would seek to address it.
Total
0
Shares
0
0
0

Young people are consuming less and less news. A study released last year found that 16-24 year-olds now only watch a total of 204 minutes of news programmes per month compared to 256 minutes in 2004, and the figures for print are even worse; only 38% of 16-24 year-olds read a daily newspaper, compared to 53% in 2001.

So what’s going on? To me, it seems that traditional mediums like TV and print are failing to properly address the information consumption habits of young people – particularly teenagers – as they have come to be.

Young people take in information on demand. News, if it is consumed at all, is something that they get because they choose to get it – they pick it, they click on it, and, if they don’t find it interesting, they click on something else.

As such, these traditional mediums, with their dictatorial insistence on what the consumer should be consuming – and even the order in which they should take it in – are simply putting them off.

If a TV news channel for teenagers is to survive, it needs to address this dynamic, not ignore it.

On this basis, I’m proposing NewsInteractive. It would be a new TV channel designed to capture the 13-19 year old market, and it would work closely with online formats to deliver news to young people the way they want it delivered.

The central tenet of this would be that the TV service would only be half of the package. While it would produce news in a traditional live format, featuring interviews, reports, headlines and bulletin segments, each of these would be augmented by references to a variety of online material.

Viewers would be directed to corresponding forums where they could supply their own views on these topics. Hashtags would be displayed so viewers could comment along on Twitter. It would be made clear that each individual report was available as a viewable video on the website (and, crucially, downloadable via mobile phone) – which, in turn, would be laid out in terms of which topics are trending the most on social media.

Viewers would also be directed to interactive web resources detailing the causes and histories of currently-unfolding events; a similar service is supplied by Radio One’s Newsbeat – which has seen traffic to its website double since 2008.

In turn, these online resources would feed back into the channel itself – segments would be produced featuring online viewers’ reactions to pieces; entire shows could be put together based on viewer submitted material. A twitter feed would feature prominently, displaying what the viewers thought about the day’s current affairs. The day’s headlines would be skewed not towards editorial slant, but according to online trend.

Through all this, the emphasis of power would be on the viewer, not the outlet itself – teenagers are used to feeling in charge of how they consume the news; this station would adhere to that, rather than ignore it.

Of course, this emphasis wouldn’t be the beginning and end of the service. In terms of subject matter, it would address many of the weaknesses of existing ‘youth’ oriented news outlets, which make the mistake of assuming that because their audience is young, it is also stupid and indifferent. The opposite is so often the case.

Young people want to hear serious news, they just want to hear it in a language that they can understand. As such, the channel wouldn’t shy away from difficult or even ‘boring’ news – it would report everything that the ‘adult’ channels reported – in the understanding that significant events are significant to everyone, not just people over thirty. Beyond this, the online reaction to the news would dictate (within reason) how much attention each of these stories got.

Tonally, the channel would take elements from the current affairs programmes that have most consistently brought in youth audiences – the more informal ones. In America, it’s The Daily Show and The Colbert Report, rather than Fox News, that capture the 18-49 demographic. Over here, Charlie Brooker has grown a large fanbase of young people with his opinionated Newswipe series. It seems clear that young people are much more likely to watch the news when its presented to them with a modicum of humour or personality. As such, the hosts on NewsInteractive would present current affairs with some degree of informality – putting as much emphasis on analysis and discussion (also see Real Time with Bill Maher) as they do on reporting breaking news.

The rotating team would be divided thus: one editor, overseeing proceedings. One sub-editor, supporting them. One news editor, overseeing planning duties and maintaining a grip on the day’s biggest stories. There would be one host at a time – taking the example of the Daily Show, this would give the channel a face. There would be three reporters/correspondents, who would go out and collect stories and do live reports and two way interviews with the host. Another reporter would specialise in international affairs. And there would be two interactivity editors, who would work to maintain that essential link between web and TV output – while liaising back with the news editor to let them know which stories are getting the biggest online reaction. 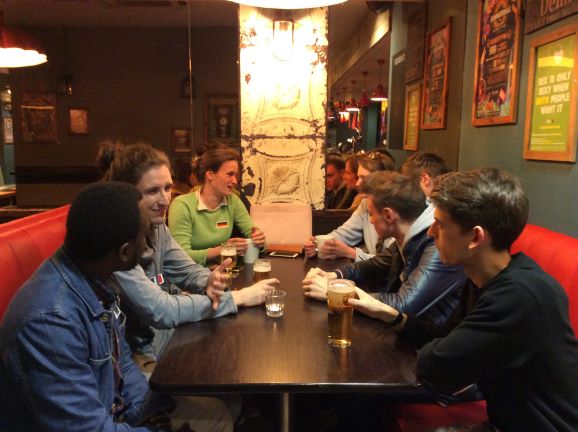 Bournemouth University’s Global Buddies program has held its first sociolingo gathering. Participants are given stickers of the language…

As teenagers and young adults turn over from the news Ian McCreery takes a look at ways the media can get teenagers interested in world events.